LLEWELLYN ONE
THE SEVEN DEADLY SINS

The 2021 Llewellyn Series opens with Stravinsky’s Circus Polka, an unusual commission for a New York ballet production. Tongue-in-cheek, the composer subtitled the work ‘For a Young Elephant’ – it was premiered with 50 elephants of varying ages from the Barnum & Bailey Circus. The dancing continues in Holly Harrison’s Fizzin’ Fury – no animals here, but plenty of progressive rock and Dixieland jazz influences.

The centrepiece of the program is Kurt Weill’s The Seven Deadly Sins, a scathing commentary on the perils of capitalist ambitions. This fractured fairytale follows Anna – voiced by Artist in Focus Lorina Gore – as she traverses an imaginary parallel of the United States of America to earn money for her greedy family. Each time Anna’s alter ego tries to behave morally, she’s scolded for failing to commit one of the seven deadly sins: pride, greed, wrath, envy, lust, gluttony and sloth. Each has its own musical character; a skilful satirist, Weill borrows from popular and traditional music: the foxtrot, the church chorale, circus music – even barbershop quartet.

The Seven Deadly Sins also bristles with the anxiety of the interwar period in which it was composed. Weill began the work in the mid-1930s after leaving Germany for Paris, his music labelled ‘degenerate’ by the Nazis.

A contemporary of Weill, Erich Wolfgang Korngold went even further to escape the reach of Nazi Germany, relocating to the USA and reinventing himself as a symphonic film composer. Dismissed by some critics as a show business sell-out, Korngold was held in high regard among film directors for his romantic, lush and melodic style. Despite his Hollywood success, this virtuosic violin concerto remains his most well-known piece. 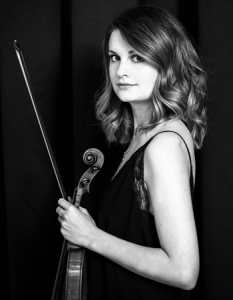 “Francis Poulenc wasn’t one to shy away from politics in his music. Penned in France during World War Two, this violin sonata was provocatively dedicated to the Spanish poet Federico García Lorca, thought to have been assassinated during the Spanish Civil War either for his socialist leanings or his sexuality. Each movement references Tea for Two, a popular song banned by the occupying Nazi forces. Devastated by Ginette Neveau’s tragic death shortly after her rapturous premiere of the work, Poulenc revised the final movement, weaving in the gut-wrenching phrases for which the piece is now known.

Béla Bartók too found himself at odds with the rise of fascist powers, many of his later works bearing the weight of war and oppression. This earlier work is filled with fragments of traditional Hungarian folk melodies, juxtaposed with violent outbursts of passion and anger.

Described by the composer as a work of ‘charm and gaiety rather than of philosophical import,’ Arthur Benjamin’s mischievous violin sonatina is actually one of his more harmonically complex works.”