European audiences of the early twentieth century were captivated by the magic of Russian fairytales. This program marks Stravinsky’s fiftieth anniversary with one of the composer’s greatest ballets, his spectacular interpretation of Firebird folklore. Premiered in 1910 at the Opéra de Paris, Firebird was Stravinsky’s big break, catapulting the composer into the spotlight.

Elena Kats-Chernin’s flute concerto also draws inspiration from Russian fairytales and the composer’s own childhood. The piece evokes colourful, contrasting settings, from an elaborately bejewelled castle to the foreboding depths of a dark forest. The piece was written for Sally Walker, making here her debut appearance with the CSO.

From Sleeping Beauty to Tom Thumb, familiar fairytale characters feature in Maurice Ravel’s Mother Goose Suite, a shimmering world of innocence and imagination. Fanfares suggest a distant castle while nature comes alive with the teeming of birdsong, the work culminating in the ecstatic beauty of the Enchanted Garden. 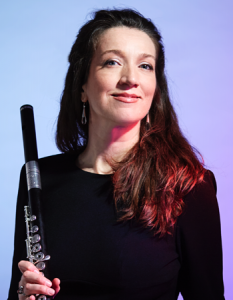 “This recital was programmed amidst COVID-19 isolation, where the elegance, poise and clear architectural shapes of classical works offered reassurance in the dance with uncertainty. The conversational nature of this exquisite chamber music represents what was so desperately lacking in solitary months as well as the joyous anticipation of the reclaiming of the live audience–performer synthesis.

We explore the transformation of composition for flute and strings over a four-hundred-year period by five composers: Quantz, Boccherini, Mozart, Danzi and Kats-Chernin, with beloved and rediscovered works dating from the 1600s to the present day.

The exciting unearthing of six quartets by renowned flute pedagogue Johann Joachim Quantz, abducted from the Sing Akademie in Berlin and discovered in Kiev after a long migration, reminds us that music history is somehow alive; new discoveries bring the musical sleuth closer to the musical scribe.

More than two centuries later, the premiere of an especially arranged version of Elena Kats-Chernin’s Moondust brings Canberra into the program. I commissioned this reverie to be dedicated to the memory of the late Dr Phillip Spradbery. A renowned entomologist, CSIRO scientist and passionate concert attendee, he was often seen in the front row of Llewellyn Hall.”