The art of the sublime: Benjamin de Murashkin’s LOGOS In 2021, Jessica Cottis will conduct Celestial Visions, a musical exploration of the cosmos. The program features LOGOS by Australian-Danish composer Benjamin de Murashkin, a musical take on quantum theory and the Big Bang.

Jessica first collaborated with Benjamin in 2016, when she conducted the RTV Slovenia Symphony Orchestra’s performance of LOGOS. Ahead of the Australian premiere with the CSO, Jessica asks him about improvisation in classical music and the role of the arts in science.

How did LOGOS come about?

LOGOS was originally composed for a workshop that we as students at the Royal Danish Academy of Music had with the Copenhagen Philharmonic in 2010.

I had recently been studying Ligeti’s piano etudes and was struck by his use of processes to structure and develop the music. I rarely respond to music composed this way – yet, with Ligeti, while his technical ingenuity can be peeled away and examined layer by layer, the surface tells a crystal clear musical argument that even I can follow. I was inspired to try and see where this methodology could take my own music, which often relies on a more personal and intuitive approach.

This manifested itself in LOGOS in what is essentially a series of three Fibonacci-sequence-based crescendos and accelerations. The opening of the piece starts with a chorale so slow that it seems like the music is actually in a state of stasis, under a blanket of shimmering winds. However, as the chorale re-enters again and again, each time faster, it sets off more and more layers of winds that soar towards the highest reaches of the orchestra.

The next section, characterised by a long, flowing melody over slowly shifting chords also puts harmonic development on the table, using processes to develop and push the harmony upwards.

The resulting climax is cataclysmic though short-lived, vanishing to reveal the harp, high winds and strings hovering lightly, at least until Tibetan-inspired trombones and cymbals come crashing in. Chord progressions manage to form and build into a brass fanfare that finally gives way to a world of serene stillness.

The work explores a scientific theory, the Big Bang, through music. What role do you see for the arts in the ‘logical’ domain of science?

I think it has to do with abstract thought. Art can have a mind-opening experience that takes us out of any rational foothold.

An example is the art of the sublime, where immeasurably over-scaled landscapes fill us with something between awe and terror. I’ve taken great inspiration from these overwhelming thoughts that seem to me to be an overlap between science, religion and art.

I’ve composed LOGOS about the sun; Cosmic Dancer about Hubble-telescope photos of galaxies colliding and the Hindu god Shiva destroying the universe; and my symphony God Spoke and the Mountain Answered, which was my direct response to an exhibition I visited on sublime art and an attempt to create something similar in sound.

Scientific concepts like multiple dimensions, string theory and the Big Bang itself all require a certain numbers-based ‘leap of faith’ that our minds have no chance of truly comprehending. Perhaps scientists experience art that takes them out of their mental comfort zones, opening up new avenues for logical exploration.

This question reminded me of an interview I saw between science educator Neil deGrasse Tyson and the evolutionary biologist Richard Dawkins. Dawkins was waxing lyrical about a world of pure rationalism but deGrasse Tyson countered that if there was a state where all the irrational people lived that that would be where all the art happened. Thinking about this brought me to the conclusion that science makes life liveable and art makes life worth living! 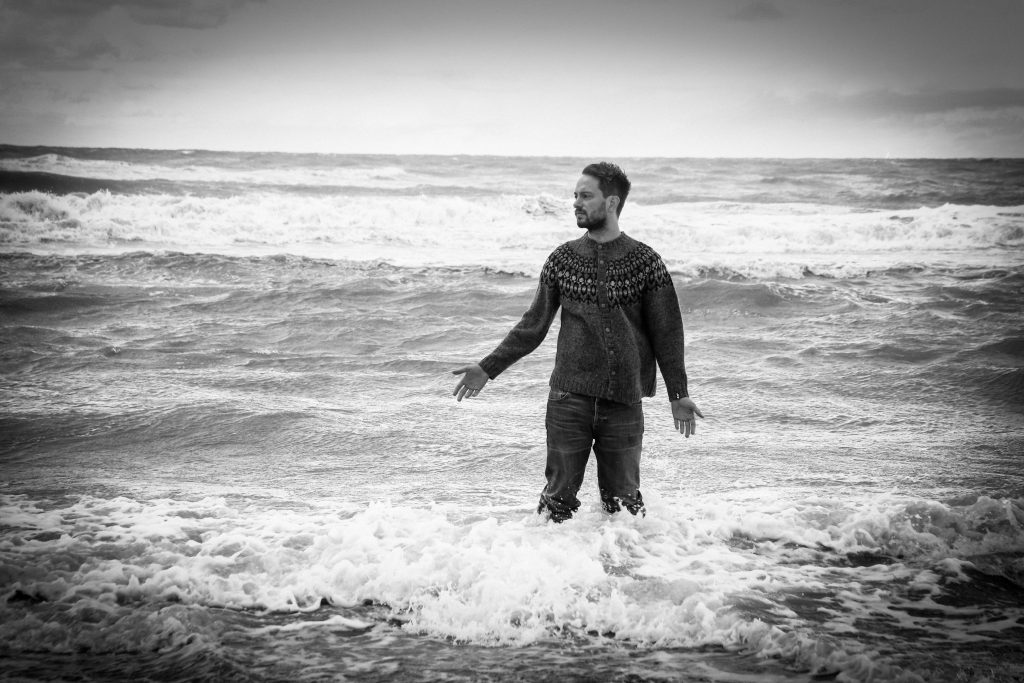 People tend to associate improvisation with jazz and contemporary genres, rather than classical and art music.

Is this a misconception? How does improvisation factor into your compositional process?

It wasn’t that long ago (on a cosmic scale at least) that classical musicians were expected to improvise their own cadenzas during concertos. These days, many would break into a cold sweat at the thought!

For composers, it’s a different matter, though it helps that there isn’t an audience around while we work. There’s always some form of improvisation involved in the compositional process, whether it’s ideas bouncing around in your head at night or sitting at an instrument trying to come up with that next great solution to: “How do I start a piece?”

I often use both of these types of improvisation in my work, and then take the compositional process further using more systematic means. For LOGOS, I improvised my way to the chorale that functions as the musical material for the whole piece, at the piano. In my mind, I settled upon the idea of having an impulse of music enter multiple times, setting off more and more layers floating outwards. The compositional process was marrying the two; how do I take this chorale and use it to realise the otherwise abstract gesture that lives in my mind of all of these outward-floating layers?

The exploration of this balancing act, the interaction of the intuitive and the systematic, keeps me passionate about composing.

If you could have coffee with any composer or artist on the CSO’s 2021 program, who would it be?

What would you ask them?

Contrary to popular opinion, I think there’s never been a better time to be a composer! I’m a lover of variety and it’s unimaginable to me to have to compose when the only music you’ve heard your whole life is in one particular style from within just a few kilometres.

The rule-breaking and rule-building of the twentieth century, together with the scientific breakthroughs that helped make the world such a small place, have led to me having no stylistic baggage on my shoulders. Today’s dilemma isn’t expressing your uniqueness in a world of rigid monotony, it’s being able to find and hone your own voice with almost too much variety of input. It’s a luxury problem!

So, while I’d certainly love to meet some of the old masters to talk about individual topics – harmony and counterpoint with Brahms, structure and form with Stravinsky, comparing hand sizes with Rachmaninov (I can reach an 11th if the weather is on my side!) – give me a roundtable of musicians from the Australian Series any day!

I’d want to know the individual paths of these Australian composers and hear about their compositional processes. The variety of backgrounds and techniques of today’s composers is an endless inspiration.

CSO Mixtape: Arundo Donax Me Why