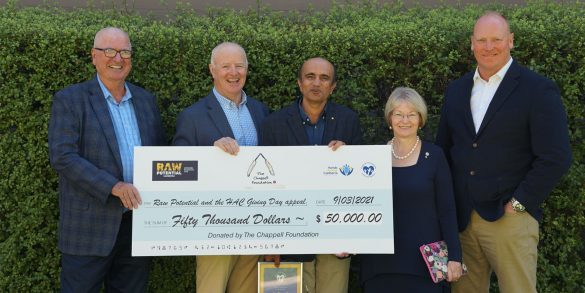 When we work together, we can achieve even the most seemingly insurmountable goals. We may never truly know the ripple effect that changing the trajectory of just one life could have on us all.

Did you know that, on average, Canberrans are the most generous donors to charity in Australia?

This is definitely something to be proud of. However, did you also know that the majority of these donations support people in need who do not live in Canberra?

This means that those living in poverty here in our city, or who need a hand to get through hard times, are frequently overlooked.

At Hands Across Canberra, our goal is to encourage Canberrans to give where they live. An independent community foundation, we raise awareness of the very real need that exists in our own backyard.

For example, in Canberra:

Over the past 18 months, this message has become even more critical, with some Canberrans who were already struggling pushed to breaking point by the impact of the pandemic. This includes Canberrans in unstable employment who have lost work during lockdowns, forcing families with children into heartbreaking situations.

Hands Across Canberra provides grants to more than 300 local organisations for services such as crisis accommodation, domestic violence support, mental health support and food donations. With the support of the Chief Minister’s Charitable Fund, we facilitated the release of over $3 million into the community last year.

We have a strong, longstanding partnership with the Canberra Symphony Orchestra (CSO), which seeks to have an impact in our community beyond the performance halls. Through its HeartStrings program, the CSO gives concert tickets to our charity network that we distribute to families who would never generally access such beautiful artistic events.

The feedback we receive is heartwarming; we know this initiative is helping us create a deeper sense of belonging in our city. We are delighted that we share a vision with the CSO to make Canberra a better place to live for everyone.

As we join hands with the CSO to further our work, I encourage all Canberrans to consider how they can support their friends and neighbours, through volunteering, acts of kindness and donations to local causes. When we work together, we can achieve even the most seemingly insurmountable goals. We may never truly know the ripple effect that changing the trajectory of just one life could have on us all.

Top image: Peter Gordon with Raw Potential and The Chappell Foundation (supplied by Hands Across Canberra)